You are here: Home / Health / A complete understanding of diabetes and its treatment

A complete understanding of diabetes and its treatment

The full name of diabetes which we know as diabetes is ‘diabetes Mellitus. Salt (salt-like honey) Sweet urine like honey means diabetes mellitus aka ‘diabetes Mellitus. From now on, for the sake of simplicity, the disease is referred to only as diabetes. In a diabetic patient, there is a deficiency of endocrine insulin, which regulates glucose in the body. The main function of insulin is to carry glucose molecules from the blood into the patient’s cells. Due to the lack of insulin, glucose molecules cannot reach the patient’s cells from the blood. As a result, even though the body has plenty of glucose, the body’s cells cannot use it. The condition of the body becomes like a state full of disorder and chaos in which people die of starvation despite the abundance of food. Even though there is plenty of glucose in the body, the cells of a diabetic patient suffer from a lack of glucose. As blood glucose levels rise (more than 120 mg / dL), excess blood glucose begins to be excreted in the urine. This important component of nourishing the body is thus wasted and the patient’s condition worsens. He feels very hungry, thirsty and urinates a lot; And in the long run, damage to the eyes, heart, kidneys, nerves, etc. can lead to many complications.

Healthy man’s blood – what is the normal sugar in the urine?

First of all, let’s understand what “sugar” means. “Sugar” can mean “sugar” in Gujarati or “sugar” in Sanskrit. Usually, when it comes to “sugar” in the blood or urine, it is considered to be glucose. Glucose is an important fuel that energizes the body’s cells. Our diet consists of three main components of energy – carbohydrates; Protein and fat. The carbohydrates that make up the largest of these three are found in many different forms of food. Cereals, lentils, potatoes, sweet potatoes, tubers, fruits, vegetables, etc. have a very large share of carbohydrates. When carbohydrates are ingested in different forms, most of the food is eventually converted into glucose after digestion. If you have not eaten during the night, the next morning on an empty stomach you will find about 8 to 115 mg of glucose per 100 ml of blood in a healthy person.

After a meal, the digested glucose is absorbed into the bloodstream within two to three hours. Blood glucose levels rise dramatically during a period of about half an hour to two hours after a daily meal There should be no sugar. A complete understanding of diabetes and its treatment

Eat a variety of foods

Instead of eating the same foods every day, eat a variety of foods. Instead of the same type of cereal-bean-vegetable or fruit, choose different types of cereal-bean-vegetable or fruit on a daily basis so that different tastes can be enjoyed and the ingredients in one type of food can be compensated by another food. If you get more potassium in some fruits, you will get more vitamins in others.

Eat as much as you use

Eat as much energy (calories) as you can use for various activities and exercise during the day. Eating foods that are more potent than you can consume on a daily basis will help you lose weight, which can be dangerous for your health. Diabetics who are overweight should plan their diet in such a way that they get about 200 kcal less energy than they use for daily activities and exercise. It is easier to control diabetes if you lose half or one kilogram of weight every month and lose five kilograms a year and maintain the weight loss. There is no need to go hungry to reduce the energy (calories) you get from food. But low-calorie foods need to be chosen. Ghee-oil-butter-meat etc. is high fat and high-calorie foods. While salads, vegetables, fruits, etc. are relatively low-calorie and low-fat foods. Increase the intake of vegetables, salads, fruits in the diet and stop eating fried, farsan, ghee sweets, biscuits, meat, etc.

Dietary fiber should be sufficient in the diet of every healthy person. Patients with diabetes should make sure that they have enough fiber in their diet. The fibers prevent the sudden rise of sugar in the blood. As well as preventing cholesterol from rising. Whole grains and legumes are high in fiber. Cereal grains (e.g. barley, kodari, samo, nagli) etc. have more fiber. So give preference to small grain grains instead of large grain grains like wheat-rice etc. Similarly, choose to use hand-milled rice and wheat flour instead of milled rice. Instead of lentils and peeled fruits, if possible, make it a habit to eat all fruits without peeling. The roots have relatively few fibers. Prefer vegetables instead.

A complete understanding of diabetes and its treatment 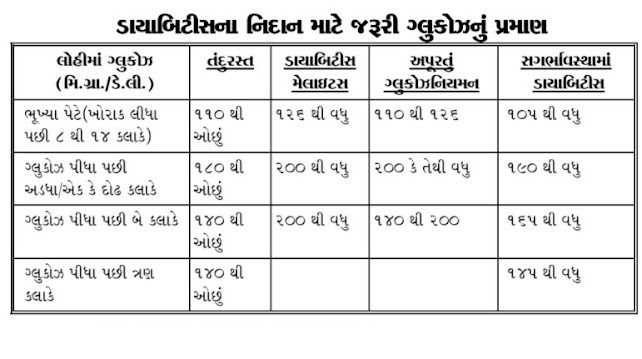 Who has a special need for diabetes prevention?

Diabetes is a lifestyle disorder. Diabetes can be prevented if proper steps are taken to prevent it.

Obesity is one of the leading causes of diabetes. Excess body fat prevents insulin from working and leads to diabetes. Thus, prevention of diabetes is largely possible if weight gain is controlled.
Women also get diabetes during pregnancy which disappears after childbirth but such women are more likely to get diabetes again if they do not take care of it further. Therefore, women who have diabetes during pregnancy have to take special care.

Hereditary diabetes can also be prevented or reversed with proper care through diet and exercise. Anyone with maternal or parental diabetes is more likely to develop diabetes, so special care should be taken.
Symptoms of diabetes usually appear in Indians between the ages of 30-40. Therefore, people in this age group should also be very careful about diabetes.

Weight gain should be stopped and weight loss measures should be taken if the weight is higher than normal.

Consumption of excess carbohydrates, sweets, refined flour, processed foods, oils, non-vegetarian foods and alcohol should be reduced. The diet should be strong and low in fat.

A diet rich in fiber should be taken more. Consumption of green vegetables, fresh fruits, sprouted grains, pulses, and coarse grains should be increased.
After 3 years, blood and urine sugar should be checked periodically as per the doctor’s advice.

Participate in diabetes-related workshops, camps, diagnosis camps etc. and stay informed about the latest information related to diabetes.
What to look for to prevent diabetes:

Just a few years ago, diabetes was considered a disease. Diabetes was thought to be more common among the sedentary and wealthy. But today diabetes has spread from village to village in India. Diabetes is now appearing even among hard-working farmers and workers. But in the villages, often due to lack of information, laziness or carelessness also leads to late diagnosis of diabetes and most people follow home remedies even after getting diabetes. Regular blood-urine glucose tests are not done and as result diabetes is greatly increased. Diabetes often causes heart attacks and strokes. In order to prevent such a serious situation, we need to know the symptoms of diabetes and the care that should be taken in diabetes. A complete understanding of diabetes and its treatment

Eat foods that are not high in sugar.

It is not uncommon for a diabetic to discontinue sugary foods, but it is important for diabetics as well as every healthy person to be careful not to exceed four teaspoons (twenty grams) a day. Excessive sweetness provides only energy (calories) without vitamins and fiber. Which is dangerous for long term health. If sugar is to be “added” to the diet, the amount of other carbohydrates (starch, etc.) should be reduced so that the total calories do not increase.

👉 READ IN GUJARATI ABOUT DIABETES

Diabetes and hypertension are associated with each other. If one happens then the chances of getting another disease are greatly increased. High blood pressure in a diabetic patient increases the risk of kidney and heart damage. To prevent this from happening, it is important for every diabetic patient to reduce their intake of sodium-containing items such as salt-soda-papad. A total of six grams of salt in the daily diet is more than enough salt. One pinch (made up of two fingers and thumbs) contains about two grams of salt so it is desirable not to use more than three pinches of salt per person. It is also important to limit the use of soda-containing dishes and farsanas (e.g. ganthiya, fafda, papadi, etc.).

Stay away from addictions

Tobacco-alcohol addiction harms a healthy person as well as diabetics. Absolute avoidance of such addictions is essential for diabetics. A complete understanding of diabetes and its treatment.