You are here: Home / Education / Schools must reduce fees for online only classes supreme court

Schools must reduce fees for online-only classes supreme court: Everyone is going through a difficult time in this time of the core epidemic. Schools have been closed for a long time. Parents are in trouble for education and fees. Schools have their own arguments over fees, while parents have their own arguments. The issue of school fees also reached the High Courts in many states last year. The controversy then reached the Supreme Court. In this regard, both the decision and the directive of the Supreme Court have come today. The Supreme Court has said that schools cannot collect full fees during the lockdown.

The Supreme Court on Monday directed private schools in Rajasthan, which run without a grant of Rs 36,000, to charge 15% less annually from students for the academic session 2020-21. The decision clarifies that in case of non-payment of fees, no student can be barred from joining the class or his / her examination result should be withheld if the situation becomes virtual or normal.

The Supreme Court has upheld the order of the Rajasthan High Court. In which the challenge to the validity of the rule made under the Rajasthan Vidyalaya (Fee Regulation) Act 2016 and the law relating to fixing fees in schools was rejected. In a 128-page judgment, Justice A M Khanwilkar and Justice Dinesh Maheshwari made it clear that the fees for the academic session 2020-21 would be paid by students or parents in six equal installments. “There is no denying that the complete lockdown imposed by the epidemic has created an unprecedented situation,” the bench said. Which has had a serious impact on the people, the business world, and the country as a whole.

Justice Khanwilkar mentioned in the judgment that a large number of people have lost their jobs in this type of economic crisis. The judgment said that the appellant (school) should collect fees from its students for the academic session 2019-20 as per the provisions of the law of the year 2016, but for the academic session 2020-21 the fees should be charged 15% less considering the facilities not used by the students. . If schools want to give their student more leeway he can and should depend on it.

Schools must reduce fees for online only classes supreme court 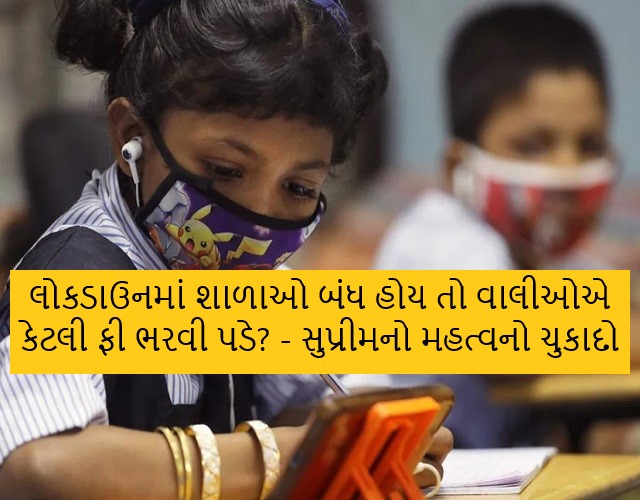 The app is designed with the aim to aid and assist the Lawyers’ fraternity in their daily practice of law, and with the further objective to simplify and facilitate the deliverance of Justice, and to spread legal literacy among the people of India.

It is kind of a Legal Reference wherein the pressing and common issues of our society have been identified, with all probable legal remedies which may be pursued, are suggested therein, along with the procedure to prosecute the remedy.

Better knowledge of the law is our weapon to protect our own person and property. Legal Infancy is akin to walking barefoot on a path scattered with broken glasses. We are completely unaware of the dangers of not knowing the basic law of the land on which we dwell. Therefore, there is a pressing need to grow from this infancy.

Many say Law is a dead-letter word. However, it comes alive with the heat of one’s action.